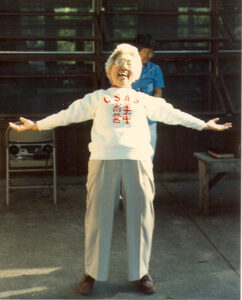 Jean C.S. Yang, born Shen, Chiaching, 93 passed away peacefully on July 21, 2006. Loving wife of 61 years to Richard, devoted mother of Virginia, Vivian and Allen, proud grandmother of Alex, dear sister to 8 brothers and sisters, aunt to numerous nieces and nephews. She was born in Hangzhou, China. During high school she was a class leader and star volleyball player who was selected to be a member of the Zhejiang provincial high school team at the national championship volleyball tournament. She graduated from Wuhan University with a B.S. in Physics in 1942. After graduation she was a science teacher at Nankai Middle School in Chongqing, China. In 1945, Jean came to the United States to join Richard, arriving in New York City on VJ Day. She received a M.S. in Physics from the University of Michigan in 1949. She was a longtime resident of Orland Park, Illinois, where she continued a lifelong career of community service. She was a Girl Scout troop leader and a volunteer at the Community Center Foundation in Palos Park. She contributed to the Chicago-area Chinese-American community as a supporting member of the Midwest Chinese Student & Alumni Services (CSAS), organ-
izer of the annual CSAS Soybean Picnic held for many years in Orland Park, and director and long-time participant of
CSAS Chinese Family Camp, now in its 48th year. She was the first principal of the Chinese Language School in La
Grange. Jean was a sincere Christian and she led the senior citizen group of the Chinese Christian Mandarin Church in Willow-
brook for many years. She then became a founding member of the South Suburban Chinese Church in Park Forest, now
Tinley Park. She enjoyed cooking, Chinese brush painting, crafts, tennis, golf and Bible study. She loved life, laughter,
new and old friends, her family and her church.

“When I think of serving and giving, I think of my mother. My earliest memories are of doing and making things with her. Brownies and Girl scouts (she was the leader), the church bazaar, school field trips (she was room mother), Chinese Family Camp (she was the director), you name it, we did it. My mother has especially talented hands. She could make anything with a bit of cloth and coat hangers. I remember watching her make an elaborate costume for a Chinese Opera performance out of cheap red cotton, tempera paint, and glitter. When she was done, it looked like the stiff embroidered silk robe of an Emperor, and she worked without a pattern. My mother is very modest. She often says that she is not smart, that her English is not very good, even though she earned a Masters in Physics at the University of Michigan. This was also a time when mothers didn’t work outside the home, but it seems to me that her real profession was, and still is, helping others. When I grew up and became a potter, I often thought gratefully of all the art and craft projects I had done with my mother, and how she helped me find my profession. And then, when I moved to Montana, I started getting interested in various volunteer projects. My mother scolded me saying that I should concentrate on my art work. I was outraged! I thought, I’m only doing what I learned from you! And I realized the real gift she gave me. I guess you could say that she gave me the gift ofservice.” -Vevan Yang 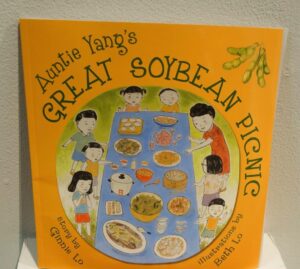 A book about our beloved Auntie Jean Yang, who discovered a soybean field in the American Midwest in the 1950’s and started a Chinese American tradition that will be forever remembered. Her love for family and her community is captured in this book made by her nieces Ginnie and Beth Lo.