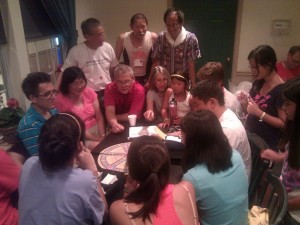 The after-dinner activities this year have been held in the Geranium room (aka the Gardenia room, as I have repeatedly called it) at the hotel. This has been working out pretty well this year, acting as the central meeting place for all Campers in the evening. There is an intense Trivial Pursuit game going on at this moment. A lot of old-time Campers arrived in the past two days and they are going strong on the game.

Also happening this week has been massive Mah Jong games in the same time slot. Some of the pre-teens made a valiant effort to stay up late last night and join the teen ed late edition, which was watching the last part of the Last Emperor. This resulted in having to carry a few sleeping little ones to bed.

We’re at the point where things are racing towards Festival, so time for reflection is over and time for doing is here. Lots of preparations left to do, rehearsals, and everything. It’s been another memorable Camp, lots of familiar things and lots of new things.